Walter Lippmann, "The Voice of America Should be Abolished" (Los Angeles Times. April 29, 1953)


This entry is a work in progress; updated/reviewed 5/22/2016; suggestions welcome -- please email john.h30@gmail.com


Walter Lippmann, "The Voice of America Should be Abolished" (Los Angeles Times, April 29, 1953)


Updated 11/24/2014: George Creel, who headed the Committee on Public Information during the Wilson administration, too was critical of the VOA in his later years[see below]. 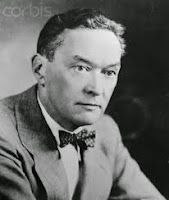 Walter Lippmann, "The Voice of America Should be Abolished," Los Angeles Times (April 29, 1953):

The Rockefeller Committee has advised the President to take the Voice of America and the rest of the propaganda apparatus out of the State Department and to create a new agency, which might be called the United States Information Service, to direct the government's overseas information activities.

This will work better, I would argue, only if, along with the transfer to the new agency, there is a radical change in the theory of what the government can and should do in the field of information and propaganda.

My own view is that for any government agency to call itself the Voice of America is an impertinence, and that in a democratic government like ours a propaganda department must in the very nature of things cause confusion at home and abroad. In a society where opinions are free a government propaganda, which is a monopoly, is an inherent contradiction and practically unworkable.

The best thing to do, it seems to me, is to abolish the Voice of America as such, to dissolve the whole organization concerned with the interpretation and comment, with reviews of books and of the arts, with the discussion of manners and morals -- and then to have broadcast through the government's facilities a selection of the regular American domestic news broadcasts. The people overseas should have available to them substantially the same news that we have available to us. Since, as a practical matter, there must be selection, the selection should, I believe, be entrusted to men chosen in our own broadcasting companies and the press services.

While this sounds like a very drastic reform, it is no more than the undoing of what no doubt a well-intentioned but nonetheless a most serious mistake of the Truman administration.

The story of how the State Department got into the propaganda business in the first place is, as things have turned out, a joke even if it were not very funny.

At the end of the war the government propaganda agency was, as any propaganda agency is bound to be, suspect and unpopular in Congress. On the other hand, the administration did not wish to liquidate it. The problem was how to induce an unfriendly Congress to go on making the necessary appropriations.

The leaders on the Hill were consulted, and the word that came back was that the only executive department which Congress trusted, the only one which was not overrun with New Dealers and whatnot was -- believe it or not -- the Department of State. I know the young men ad the newcomers in Washington won't believe that. But that was the way it was in 1943, when James F. Byrnes was Secretary of State.

The propaganda organization with its multitude of employees was not taken into the State Department because Secretary Byrnes wanted to do propaganda. It was taken in by him because he was a compassionate Democrat who alone could provide a refuge and asylum for the displaced persons of the wartime propaganda service.

When the transfer had been carried out, the propagandists, who were now working for the Secretary of State, began to think of new worlds to conquer. So they baptized themselves the Voice of America and began broadcasting throughout the world to all the races of mankind in all the languages their selections of the news and their opinions and comments and interpretations of the foreign policy of the United States and of all other countries.


Thus the Voice of America, as heard day by day throughout the world, was not the President of the United States or the Secretary of State speaking. It was a miscellaneous collection of people who could speak various languages.

What they were saying from hour to hour in Albanian, in Arabic, in Bulgarian, in Hebrew or Korean, was certainly never known to the Secretary of State or to the Assistant Secretary nominally in charge. For even if some official of the department read what was to be said before it was said, let us say in Albanian, he read it in the English text. There was no way he could know or check on what it would sound like when it was translated, or what it would be mean when it had been read.

Nothing is easier, as we all know, than to say that "Susie is a nice girl," and make it mean several different and contradictory things about Susie.

The State Department could never know what was really going on. There was no way by which it could all the people who were impersonating the Voice of America. For the whole conception of the operation was wrong. It put the employees of the Voice of America in a false position, tempting them with power they should not have, subjecting them them to attacks which they cannot answer. The false conception created a situation where Congress could never trust the propaganda agency, and yet could never reform it.

And the net effect abroad can, I believe, be described fairly as self-defeating.

To set up an elaborate machinery of international communication and then have it say, "We are the Voice of America engaged in propaganda to make you like us better than you like our adversaries" is -- as propaganda -- an absurdity. As a way of stimulating an appetite for the American way of life it is like castor oil as a cocktail before dinner.

Foreigners are in more ways than one a good deal like Americans, and certainly like us in that they do not wish to feel that they are being manipulated and made fools of by someone with something to sell. Anyone, therefore, who says he is a propagandist is incapacitated to be one. Furthermore, anyone suspected of being a propagandist, as all government paid "voices" are and should be, is a lame duck from the beginning.

This suspicion cannot be removed as long as the government serves up to the foreigner different information than is being served up to the American people.

In principle the foreigner should not be asked to listen to the U.S. government speaking. He should be enabled to overhear what the American people are hearing. He will then have the same protection against being the victim of propaganda, the right of our free that we have -- namely, the right in our free society to challenge the validity of a news report and to criticize the handling of it.

This is the only way, and it is the best way, to create confidence abroad in the integrity of the information that we offer them.

It will be said, I know, that if we abolish the Voice of America, if we limit our overseas broadcasts to straight news, that we shall "lose the battle for men's minds" to the Communist who conduct incessant propaganda.

I do not think there is any evidence that the Voice of America has been winning that battle. On the contrary, there are all sorts of reasons, I believe, for thinking that it does much more harm than good to our influence abroad.

Creel, in the 1950s, was also critical of VOA.  His papers in the Library of Congress contain entries noting that he wrote an article condemning the radio station; unfortunately I haven't been able to locate the article.

I came across while watching movies. .Thanks for sharing..^__^..I will tell my sister and friends about your blog...pls continue to
write an article...I'm looking forward for the upcoming posts you will be posting

want to watch american and korean tv series and movies?

Any Idea Where to watch movies online?
In these days , you can Watch movie online for free without ads and payment needed.

I know we love to Watch movies online even

American Tv Series . I don't know if you are also fond of watching

Korean Tv series . My name is cielo I am a movie and tv series lover

"is now Trending"
for more trending news try to visit "

And by the way, Check the latest episode of The Voice I love that Show.