The real problem with the Modernized Smith-Mundt Act: its "zero effect on the CIA or the Pentagon"


"Let's dispel some myths about the Smith-Mundt Modernization Act. First, it has zero effect on the CIA or on the Pentagon; Smith-Mundt only covers information programs produced by the State Department and the Broadcasting Board of Governors (BBG). The CIA and the Pentagon remain subject to entirely different laws and restrictions on certain kinds of domestic activities." 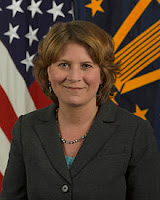 --Ex-Pentagon official Rosa Brooks, "The Case for American Propaganda: Complain all you want. But Uncle Sam produces better journalism than most of you yahoos," Foreign Policy, July 17, 2013; Brooks image from

Pray tell, Ms. Brooks (you, as a former Pentagon official) what are the "laws and restrictions on certain kinds of domestic activities" that the Department of Defense and the CIA (if you are au courant about Langley in-house intricacies) subject to?

To me, as a layman with no legal training, these obscurities are by no means obvious, especially if one considers items such as "Rumsfeld's Roadmap to Propaganda: Secret Pentagon 'roadmap' calls for 'boundaries' between 'information operations' abroad and at home but provides no actual limits as long as US doesn't 'target' Americans," National Security Archive Electronic Briefing Book No. 177.

Your kindly providing elucidation on laws/regulations governing domestic information dissemination by military/"secret" agencies involved in foreign affairs would do much to answer a taxpayer's (yours truly) non-specialist questions on the matter at hand:


Isn't one of the real troubles with the Smith-Mundt "Modernization Act" that it does not deal with the 21st-century challenge of "telling it like it is" to the American people about  what some would consider the propaganda/manipulation/deception originating from "homeland" organizations (DoD, CIA, Homeland Security, National Security Agency -  NSA, one of whose mammoth date centers is located at Bluffdale Utah; is someone trying to be funny?) -- no matter how well-intentioned and patriotic their employees may be?

Must we Americans depend on a computer whiz-kid/high school drop-out seeking asylum in an authoritarian state (having earned more at the NSA than some American ambassadors) to reveal to us on other "homeland" agency, NSA, is up to, and on timely but superficial USA Today exposures of Pentagon domestic propaganda for reliable information on the domestic use of USG propaganda (am perfectly willing to accept a better word for this)?

So why can't you, as a former high-ranking official (and respected journalist), provide us with  complete information on these Smith-Mundt related issues -- granted, of course, that such "disclosures" don't endanger Americans working, as honestly as they can, for their country.

FYI, below are my prior minor thoughts on the above issue, which appeared in the Huffington Post in May 2012:

As part of  [an American] anti-propaganda tradition, the Smith-Mundt Act, the 1948 legislation (amended several times) which prohibits the domestic dissemination of some USG-produced propaganda ("information") directed to foreign audiences, is still relevant today. To be sure, the Act could use fine-tuning to deal with the internet age and a globalized world. Americans today can easily find Voice of America news on the Internet. So, some say, forget about  a  60+-year Cold War relic!

Critics of the Act have noted that it was never meant to apply to the Department of Defense, which has its own rules prohibiting domestic psyops.

But this lack of coordinated control over propaganda activities by military and civilian agencies actually underscores a need, without censorship, to reinforce Smith-Mundt's most important point -- that a democratic government should not propagandize its own people, as was the case with totalitarian states like Nazi Germany and the Soviet Union, and as is true of today's mainland