"Her English is too good, he said,
Which clearly indicates that she is foreign."

While teaching, in English, a two-week course pertaining to the United States to foreign students, most of them Croatian, in the charming Adriatic city of Dubrovnik, I cannot help but be linguistically refreshed by not having to endure the insupportable verbal tic "like," so frequently uttered by Americans of all ages, but especially the young.

It is also enchanting, while enjoying the privilege to give my course, to be blessed with hearing complete sentences, increasingly passé in America, coming from the mouths of twenties-something, even if uttered with an "accent."  Moreover, the absence among my current English-speaking Dubrovnik students of uptalk, unfortunately still prevalent in the U.S., is equivalent to being spared of aural torture.

And what a gift, when hearing young Adriatic ladies speaking in a soft, yes delightful feminine tone in a language that is not theirs, for the listener to be spared of the metallic voice of American young persons of the female persuasion, using their vocal cords like nails on a blackboard, to "speak" on their cell phone to their "friends," all the while reaching, grinding, into the deep innards of their throats, as if they were about to gag in order to utter a word.

Am I exaggerating? I suggest you ride the DC metro at 8:30 am and listen, if you can stand it, cell-phone "conversations."

Of course Croatians, avid users of the latest form of electronic communications, do seem, I have noticed, to have their own verbal tics, most noticeably the repetition of "ovai." So obviously no one on our small planet is linguistically perfect.

Yet I cannot help but observe that English, even if spoken with (without?) an American twang in foreign lands, often is far more bearable to the ear (or at least mine) than what is heard in the US of A itself.

I attribute this odd situation -- English spoken "better" overseas than in the homeland (1) -- in part because when educated foreigners learn English, many among them actually pay attention to its grammar, and give it the respect it deserves by speaking it as clearly and accurately as they can -- a form of minor discipline not often required in American schools, with their emphasis on encouraging "self-expression," no matter how incomprehensible. 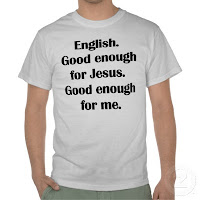 It is no surprise to me that, because American learneries have totally abandoned the art of rhetoric -- speaking well -- many US undergraduates are incapable of producing a coherent sentence in writing, with the use of apostrophes (e.g., its vs. it's) a special "issue" (of course, nothing in the Land of the Brave is a "problem" anymore, given how perfect we are).

Yet how can American students, especially those interested in "international relations," learn a foreign language if they can't even master the basics of their own (basics which, some would say with considerable justification, don't exit -- oops typo, I meant exist) ?

I should also mention Hollywood movies/TV shows, so many of which, unlike 1930s film classics, do violence to the language of Walt Whitman by replacing dialogue with mumbling mushed in muzak.

I often ask myself while watching Tee-Vee after a "long day": Am I getting hard of hearing, or are these idiotic programs actually not meant to be listened to but only "watched," as writing a script to be spoken becomes "such an expensive hassle,"  from a media corporate "bottom-line" perspective,  for audiences who are so zonked-out that they'll sit in front of anything that has flashing pictures/"reality shows."

Mind you, I am not a believer in the "purity" of any language/culture. American English, constantly re-inventing itself,  is an all-receiving sponge, sucking in all kinds of high-/low-brow words, much to its enrichment. Indeed, one of America's great strengths is that we don't judge people by their accents when they speak our version of English.

Still, the degradation of language in America -- of clear, concise communication that is based on accepted (yes, whatever that may mean) conventions of understanding and is not unbearable to the ear -- can be cause of worry, if we wish to exchange ideas with one another -- and the world -- in intelligent ways.

Well, ok, let's get real here. Why should we (persons concerned about America's role on our small planet) need to worry about admittedly minor linguistic matters, in the elastic society that America is? Perhaps we should sit back and relax in front of the Tee-Vee.

As that genius of the U.S., Alfred E. Newman, said (pictured below), What Me Worry? 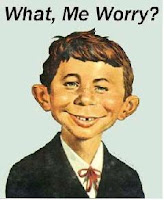 And, after all, American adolescents sure make great videos ... and boy can they "write" as they think is right in, like, under 140 characters!

Like, you know what I mean? Chill out old man!

USA-ers sure can, like, kommunicate! Awesome!!! Hey, dude, see, like, the below free sample!!!! -- when social media illiterates nail a job and have to turn to "serious" writing to get ahead: 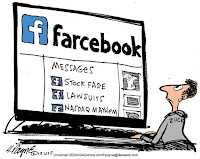 "Updates to Data Use Policy and Statement of Rights and Responsibilities [:] We are also proposing changes to our site governance process for future updates to our Data Use Policy and SRR. We deeply value the feedback we receive from you during our comment period but have found that the voting mechanism created a system that incentivized quantity of comments over the quality of them. So, we are proposing to end the voting component in order to promote a more meaningful environment for feedback."

--From an email from Facebook; image from; see also

(1) An appalling, Nazi-sounding word for which we have George W. Bush to thank for its reprehensible introduction into the general American vocabulary.
Posted by John Brown at 11:15 PM

I need to write an essay for my homework. Just need few tips.Thanks for your post.

I always read this blog and every time get the feeling like inspired or being active in my life .I used to be checking forever this weblog and I am impressed. Very useful info, Specially the last time I take care of such in order a lot. I wish to give opinion you some interesting things or tips. I used to be looking for this optimistic information for a long time. Thanks and good luck.