"a new job posting appeared on its [Booz Allen] Web site for a systems administrator in Hawaii,
'secret clearance required.'"


This is the not very inspiring tale of a conscience-stricken technical contractor and of often morally weary diplomats -- a tale put in very down-to-earth terms: how much each of these employees gets paid for what they do.

How much do ambos actually make?

The official State Department Foreign Service pay chart can be found at; danger pay at; allowance rates at (I thank my colleague Brady Kiesling for this information, not included in the the original version of this entry).

Some sampling of media reports on ambassadorial salaries: One ambassador, some years ago, did state (evidently in late 2012) in answer to the question "How much money do you make as a US Ambassador?" that


I’m now in kind of the senior ranks of the State Department, and I think that it's publicly listed that the senior salary is ranged from somewhere from $130,000 up to maybe $160,000.

In an undated but evidently recent entry, "How Much Do US Ambassadors Get Paid?" Lisa Dorward, Demand Media, writes:


Ambassadors are classified as senior foreign service employees. The 2010 through 2012 minimum pay for ambassadors is $119,554 a year. The maximum is $179,700. The State Department is one of many governmental agencies that have adopted a certified performance appraisal system. This system allows an ambassador's base salary to exceed the established maximum based on merit or value to the mission, but it may not go over the salary set for the Vice President of the United States, which was $230,700 a year as of 2011.

In June 5, 2012 article, "U.S. Ambassador Salary – Highest Paid U.S. Ambassadors," a Sammy Said notes, inadvertently (it appears) adding a couple of extra zeros which doubtless many ambassadors would welcome on their paychecks:


After reaching to the senior level the salary of an ambassador touches the career cap and may not increase any further. By 2010 the senior career diplomats may earn up to a minimum of $119,554 or a maximum of $179,700. At the executive level or the highest most level of the diplomatic corps the minimum salary is $145,7000 so far as the EX-IV is concerned, and a maximum of $199,7000 for the classification of EX-I.

Let's all work for Booz Allen (booze of course not provided)

Meanwhile, a high school drop out for Booz Allen (a company under an National Security Agency contract) was reportedly making between $123,000 and $200,000, depending on whom you ask. One recent report states: "Snowden overstated his salary... by a lot."

No matter what the exact amount of his salary was, I hope Edward Snowden, this well-paid (by most standards) twenties-something technical contractor who spilled the beans on some of the classified details of his job, enjoyed a comfortable lifestyle while employed.

Some admire his courage at speaking out, others condemn him of his having "betrayed" his country and friends. We don't know much about him, so I won't pass a final judgment on his motives for going public.

I do give him the benefit of the doubt, as I am much concerned about the creation of a permanent "surveillance" state initiated (arguably) during the Bush administration's misnamed "war on terror" supposedly fought to defend "the homeland."

But a footnote that most media I've followed on this intriguing and unsettling affair -- which goes beyond Mr. Snowden -- fail to consider is what the foreign-policy priorities of our government actually are in concrete form, by not putting on the table the mundane issue of how much the USG (or its contractors) pays its different kinds of employees.

Put simply and perhaps crudely, a somewhat inarticulate spook computer tech-"expert," no matter how admirable his conscience became, was getting a salary commensurate/equal to a salary an ambassador openly representing our country overseas. 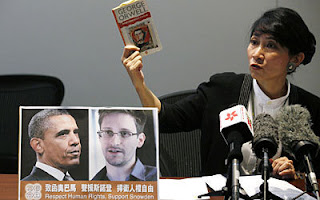 Granted, we're all biting too many pieces of the apple pie we can't afford

Granted, most political appointees (some 30 percent of ambassadors) to fancy ambassadorial posts (London, Paris) don't really need an couple of extra grand a year, although rich people do count their pennies, which may explain why they have them. And U.S. diplomats overseas probably enjoy benefits/perks (e.g., free housing) that Mr. Snowden evidently did not in his most recent assignment.

And true, America is the land of opportunity, where school drop outs (they include Bill Gates and Mark Zuckerberg, both of whom never finished Harvard, granted not a high school) can make it "big time."

And, in our time when the richest one percent is making bundles and the middle class is struggling (not to speak of the poor) arguably diplomats, including non-political appointees, are being overpaid at taxpayers' expense.  (See: The U.S. ranks 16th in manufacturing compensation costs," Ranking America).

These are fair concerns, especially in an American context.

Hey, What About overseas (as if that counted)?

But consider (perhaps too perversely) what kind of "public diplomacy" message we are sending abroad, perhaps unintentionally:

A conscience-stricken 29-year-old spook in a secure/obscure installation in Hawaii involved in secretly collecting intelligence on Americans and foreigners -- and naive in thinking that communist-controlled Hong Kong, on all cities, would provide him with a safe hiding place, after telling his boss "that he needed time off for epilepsy treatment"-- was being remunerated more than (supposedly carefully selected) diplomats who openly engage important officials and the significant public opinion overseas.

Standard State Department explanation for tricky situations such as the above (why are your diplomats paid less than your contractors): (a) We are democratic, every person can voice his/her opinion and earn a salary commensurate to his/her skills, regardless of his/her degree (b) We the USA make mistakes, but we acknowledge our mistakes. That absolves us of our mistakes. No other country in the world can say so "honestly" that it was wrong.  So we are right because we say we are wrong.

Here are the Beatles: "Just Give Me Money, That's all I want"

Money is of course not everything, but money talks, and foreigners, so repeatedly told by the USA about how entrepreneurial and business-oriented we are, doubtless wonder if we put our money where our mouth is.

Techs vs. Dips? A false distinction, arguably, that can ultimately be reconciled by those who pay them both  -- the taxpayers and their elected representatives.

Jay Leno: “The big story...continues to be this 29-year-old Edward Snowden guy. The man behind the leaking of the story of the NSA spy scandal. A lot of speculation about this guy. One of them now is, that Snowden is hiding in Hong Kong and could be working for . Hey, let’s get real, okay? Aren’t we all pretty much working for ?”

Image from, with caption:  Hong Kong lawmaker Claudia Mo Man-ching holds a copy of George Orwell's "1984" next to images of President Obama and former U.S. intelligence contractor Edward Snowden. She accused Hong Kong's leader of merely waiting for orders from Beijing on how to handle Snowden

June 14, 2013 (Jay Leno)
Note: Original entry revised AM June 13, 2013
Further revision: PM June 13, 2013. This article pertains to Snowden and the Foreign Service
June 23 update, with JB comment: "This ignorant computer geek who discovered he had a conscience is now a pawn involved in the machinations of hard-nosed players who are trying to get rid of him as best they can. Welcome to Ecuador, Edward. "
Posted by John Brown at 11:37 AM

One more symptom of the absurd privatization of US foreign and defense policy.

There is a typo (doubtless, among many others) in the above piece, which I've just re-posted given Edward's innocent propaganda appearance in front of a KGB apparatchik: "But a footnote that most media I've followed on this intriguing and unsettling affair -- which goes beyond Mr. Snowden -- fail [should be fails!] to consider is what the foreign-policy priorities of our government actually are in concrete form, by not putting on the table the mundane issue of how much the USG (or its contractors) pays its different kinds of employees.