Propaganda, Public Diplomacy, and the Most Watched Foreign News Channel ....

Re the success of the Kremlin-sponsored Russia Today (RT) television in the US of A -- pointed out by Kim Andrew Elliott below -- I would suspect that many of the quite clever and sophisticated RT editors (propagandists) are the cosmopolitan, multilingual, cynical sons and daughters of the now dying Red Cold War Russian upper bourgeoisie whose family privileges under the communist regime allowed them and their offsprings to travel/live abroad in style (by Soviet standards).

These jeunesses dorées westernized Russian RT propagandists are, doubtless with an ironic smile on their perfumed faces, turning our putative USA belief in free speech "against" us, by suggesting all along that opinions expressed by Americans themselves on RT are mostly ignored by US mainstream media.

It's the old "surrogate" public-diplomacy game, used (with the most honorable of intentions, of course) by RFE/RL during the Cold War information circus (e.g., dissidents, so often despising one another, "speaking out" against "the regime" and for "democracy"), and which was (I guess) quite effective then (exactly how no one can really tell; 1956 Hungarians who were not crushed by Soviet tanks might provide an answer), and seems to work, according to statistics (and who can ever trust statistics) in the 21st century American homeland today.

Maybe RT will incite the now passé 99% Occupy Wall Street loony left to take over the 1% sales capitalistes on the NY Stock exchange; but Russia Today's propagandists are careful not to suggest that Mother Russia will come to the rescue of America's oppressed masses (least of all by tanks, as she did to "save" the proletariat Eastern Europe before the USSR collapsed).

Also, RT has, so far as I can tell, no insufferable ads for, say, penile dysfunction that would lead some (I include myself among them) to throw shoes at the monitor facing them when tuning on to the "news"-- knowing all along that most news and news programs are, after all, the "shock troops of propaganda":  Sir John Reith, cited in Philip M. Taylor, “The New Propaganda Boom,” The International History Review (Volume II, Number 3, July 1980), p. 498).

But if the RT propaganda is at times somewhat more interesting (or at least less unbearable) than the ad-filled USA-all-the-way marketing by the robot-like "anchor-persons" of the US mainstream TV corporate media (how often could we watch the vulgar and ignorant Katie Kouric, thank God now gone, with her Joker-like smile 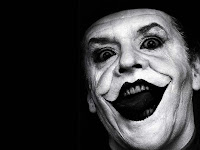 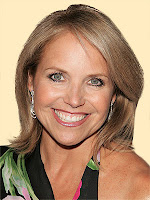 reminiscent of the comic-book monster in the Batman films) or the two dreadful pundits with their so-called "analysis" on "public" Tee-Vee (a senior moment prevents me from remembering their names, given the mediocrity of their oh-we-can-disagree-but-really-agree commentary) why not "watch" it, the RT propaganda, right there on RT itself, in the good ol' homeland, without being told to buy pills to keep you potent even after you reach age 100 -- or (in putatively ad-free public television, although constantly demanding your "donations," for what purpose is not utterly clear), looking at the rooster-like neck (hidden in this clip)

of Mr. Shields or the balding head (nearly hidden) of Mr. Brooks who always smiles as if he were about to gag while they both utter (suddenly, why oh why do I remember their names) inanities under the pretense of pundit "analyzing." As for Fox, I was warned nearly ten years ago (Iraq-invasion time) that "John: Looking at Fox in the morning is like drinking in the morning."

May I note, hoping that my sense of humor will offend no one, that the BBG (Broadcasting Board of Governors) consider hiring russkii impropergandists -- bright, young, savvy, English-speaking RT experts who would love to have a Madison Avenue PR job but would settle working here in America for the USG's dinosaur-like international media outlets, if only to get out of Russia (from which they were not "really" from to begin with) willingly contributing (anything for a green card) to the effort, as some in Congress desire, that the USG-funded media be used to propagandize the American people in the "war on terrorism."

RT (Russia Today) "most-watched foreign news channel in five key US markets" - [Elliott comment:] "Why this apparent success for RT? There might be parallels here to CNN versus Fox and MSNBC. RT's competitors are merely news channels, whereas RT itself is edgier, appealing to a coalition of groups with motivations to view like-minded content. The RT coalition consists of the far left, the libertarian right, conspiracy theorists, UFO believers, adherents of the gold standard, and perhaps a few who want to meet Russian ladies."
Posted by John Brown at 2:01 PM